The Silk Road.  People have been traveling this route for over 2,000 years between Asia and Europe.  Bala, our trusty stead, is still struggling with an overheating problem, loss of power, and a new problem with the front suspension. But we continue to move West, along this ancient trading route, through deserts and sandstorms, across borders and seas, and through cities that are older than Moses (literally)….and we continue to collect stories and experiences along the way.  To live a few of them, keep on reading…

Border crossing entering Uzbekistan: Searched for Codine (painkillers) and bibles (both strictly forbidden).  But everyone was friendly enough.

Border crossing entering Turkmenistan (keep in mind we only have 4 days to travel 1300 kilometers across the entire country and were already delayed by a flat tire just 30k before the border, so needless to say we are in quite a rush.):  Arrive at border (after being searched AGAIN for codine and bibles by the Uzbek exit customs), fill out various forms, wait.  Wait. Wait.  Collect various stamps on various forms from one guy, sent to other guys in army fatigues who send us back to the first guy who sends us back to the Army guys who finally tells us that we need to talk to a third guy (we are now one hour into the process), BUT…(He makes hand to mouth motion), we understand through extensive pantomiming that the entire border crossing is closed now for lunch.  Wait on the curb for an hour and a half.  Wait. Wait. Hot. Wait.  After work resumes, we are drawn a map of the route we will take and explained we are not permitted to deviate from this route.  A few more stamps, and some “road tax” payments made and we are on our way.

Imagine what it is like to be standing under a heat lamp…wearing an ALL BLACK astronaut suit (protective motorcycle pants, jacket, and helmet…and then imagine you are standing in front of a gigantic very hot hair dryer.  Then you will have an idea of what it was like to drive through the Karakum desert of Uzbekistan and Turkmenistan.

We were a bit surprised when we payed our bill for lunch just after entering Uzbekistan and it amounted to a stack of notes almost an inch high.  One US dollar is 2,300 Uzbek Som…And the largest bank note I ever got was for 1,000 Som (there are of course for even lesser amounts).  People would walk around in the bazaars doing their shopping with plastic grocery bags full of money!

We discovered a country that few people ever visit (because they rarely issue tourist visas), that you might not have ever heard of, but that we thought was fascinating and ridiculous. We call it Absurdistan (AKA Turkmenistan).  Whats the deal with Turkmenistan?

Our guidebook said “Only the insane or deeply unfortunate find themselves in Ashgabat (Turkmenistan capital) in July or August, when temperatures can push 50 degrees Celsius (122 Fahrenheit)”.   We cruised into Ashgabat, the capital of Turkmenistan, on July 17th, feeling as usual, a bit insane, but certainly not unfortunate.  Because we were about to experience what proved to be, by far, the most bizarre place I have ever visited in my life.  Ashgabat observations: 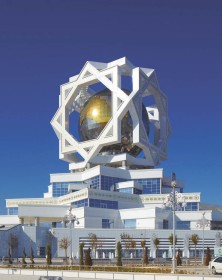 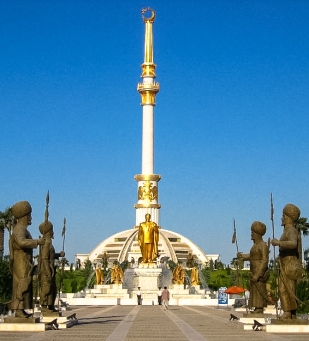 Perhaps the winner of the absurdly bizarre monument award is the “Arc of Neutrality”, which is adorned with a gold plated statue of former president Turkmenbashi that, we read, rotates during daylight hours so that it always faces the sun (must have been broken when we were there).  This we had to see for ourselves.  We pull onto an EIGHT LANE road that leads to the monument.  On either side are multiple parking lots, probably enough to park a few hundred cars yet I’m sure none of them have ever seen more than two cars parked in them at one time, EVER. There is no one.  ZERO. Not one car or person.  We pull Bala right up to the front and laugh at the absurdity of the monument as we stare at it.  Then we see what appears to be a ticket booth.  Could it be?  Can we actually go up and inside of this thing?  Surely there is no one inside the ticket booth.  But, low and behold, as we approach we see a woman inside.  “Two tickets please?” I ask with doubtful inflection.  To our surprise we are given two little scraps of printed out paper.  Now our excitement has reached a childlike glee. We cannot believe we can go up into this thing.  We march off towards the monument when an AK47 armed guard stops us saying “Niet!….making it clear we are not allowed any closer”.  We try and show him our tickets, he takes a look and shakes his head…”Niet!”  Confused and disheartened that perhaps the tickets we bought were for something else, we try and explain…”But we just bought them, right over there” pointing to the ticket both just 50 meters away.  He takes the ticket again, holds it closer to his face, scrutinizing it.  Clearly this is the first time he has seen this.  He gets on his radio, a discussion ensues.  Our access seems to be granted and a small elevator starts to move down the side of the monument. The door opens revealing an expressionless young man

who motions us in.  By now I feel like Charlie entering Wanka’s chocolate factory I am so excited to be part of this absurdity.  The top of the monument reveals amazing views of the capital of Absurdistan and all its absurdity. From the top we can see in the scorched desert that an artificial forest of pine trees has been planted in perfect rows for as far as the eye can see, literally.  (They were planted by Turkenbashi  who believed they would lower the temperature in the city).  Most are dead or dying in the desert heat.  To either side of the monument are symmetrically identical parks with fountains and large restaurants which seem to have been abandoned a long time ago.  Not a soul is to be seen. On the way down the elevator stops at the “museum” where a half dozen women, dressed in bright traditional clothing, are sleeping on all the small plush benches…the cleaning ladies.  They scramble to their feet, amazed to see actual tourists (or anyone for that matter) visiting the museum.  A tour of the small museum reveals ludicrous and gaudy little trinkets which are supposed to honor Turkmenistan’s role as a world power and are made from what was claimed to be solid gold and precious gems. Afterwards one of the cleaning ladies accompanied us down the elevator where, so amazed to have seen us there, she asked me if I would take her picture with Magdalena

Delayed by flat tires and an absurd border crossing into Turkmenistan, we realized we had no chance of making it across the country with our 45mph (65kph) top speed on our limited time visas.  So we decided to put Bala and ourselves on a train for half the way.  The process seemed easy enough, and absurdly cheap.  All was well until we got off the train at our stop, went to the back of the train to help unload and claim the bike when, chugga chugga chuga chugga….the train began to move and off it went into the early morning desert light…with Bala on board.  With the help of a friendly stationmaster we arranged a car that raced 30k in the wrong direction (to get gas), then 120 kilometers along the highway dodging stray camels along the way to arrive at the next train station JUST as Bala and our train pulled in 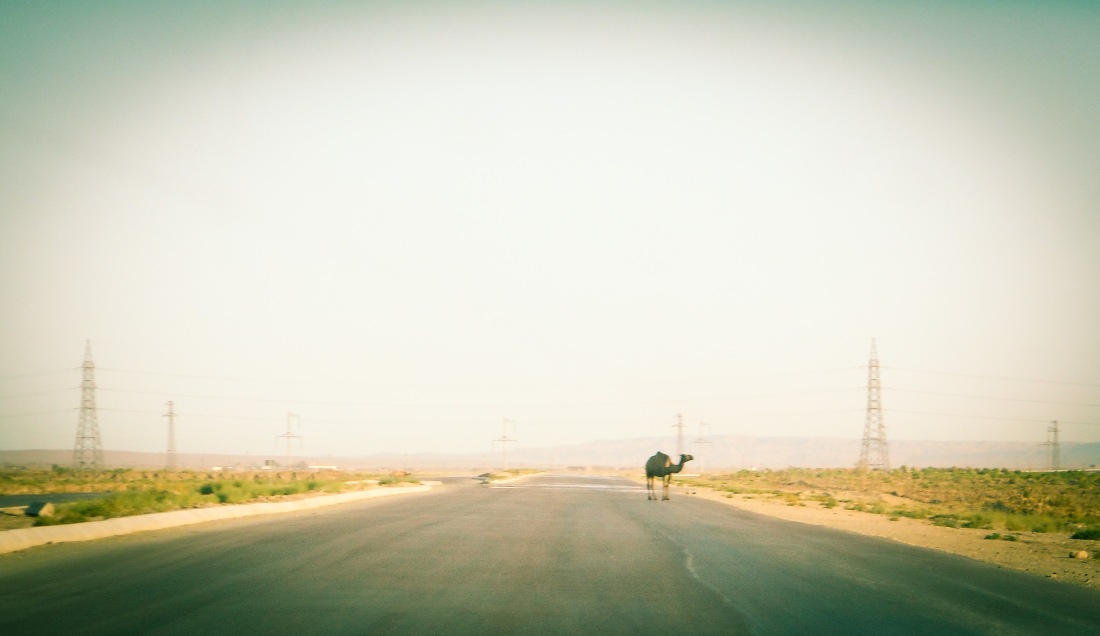 After our runaway train/Bala episode, having successfully unloaded Bala from the train I found myself driving her alongside some torn up old train tracks and I had one of those moments that come to even the most experienced travelers from time to time…just a moment when reality hits you “Holy shit, I’m on a motorcycle…..  driving through a trainyard…..  in Turkmenistan”.  They are moments we travelers live for

Need to restore some of your faith in humanity?  Some random acts of kindness bestowed upon us:

To Magdalena’s disgust and the ice-cream man’s delight,I ate 4 ice cream cones to get rid of our last Turkmen Manat (currency) while waiting for our ferry to leave.

The process of exiting Turkmenistan proved to be an extensive bureaucratic circus that cost us two hours of time and several bribes to officials.

We were shocked to arrive in Azerbaijan…shocked at how European it was, shocked to see Mcdonalds and Carrefour (like European Walmart for those who don’t know), shocked that our days of horrible roads seems to be over (for the most part), but happy to find that people were still friendly and interested in us

We swam in the Caspian sea

We slept next to the highway

We slept in the home of a Russian guy in Azerbaijan who used to be a patriot but eventually became a sharp critic of Russia’s government.  We listened, fascinated, to his opinions of the Ukrainian conflict.  Then we all sang Karaoke.

We slept in the middle of the Caspian Sea as two of 6 other passengers on a ferry that took us from Turkmenbashi, Turkmenistan to Baku, Azerbaijan.  We cooked our dinner over our little beer can stove, and watched the sun set into the Caspian Sea.

I post this from Southern Turkey, just 50k from the border of Syria….yes I am way behind in posts but promise to try and catch up soon.  We are alive and well…more stories on the way.  In the meantime…

7 thoughts on “Uzbekistan, Absurdistan, and Azerbaijan”