I woke up before the alarm on my phone to the sound of a donkey braying… in Afghanistan.  Unzipping the door to the tent and stepping into the sunlight, the sound of a rushing river brings me into the reality of a new day.  Just across the river, a literal stones throw away, is the donkey and Afghanistan.  A few mud houses peppered the side of a snow capped mountain that rose up into an astonishingly blue sky. At 3,400 meters (11,200ft.), the air is fresh and cold.  Our camp is on the Tajik side of the river.  The day before, we rode on atrociously horrible dirt roads over a 4300 meter (14,100ft.) pass for a couple hundred kilometers.  Aside from a military checkpoint that we went through, we saw only three other vehicles in 8 hours on the road.  This is the Pamir Highway.  Desolate, exciting, dusty, freezing cold, unbearably hot, stunningly beautiful, dangerously bumpy….. What stories have I to tell from Tajikistan…to name a few….

We drove 1,325 Kilometers (825 miles) through Tajikistan.  For 600 Kilometers and five full days of riding we followed the Afghan border through the Wakhan Valley.  Our route:

With a seemingly endless washboard dirt road narrowing into a moonscape horizon we bumped along at a painstaking 25kph (15mph)…then we heard a loud “Whack!”…to find that our luggage rack had broken.  With a little Macguyvering we were back in action with the same endless washboard road ahead of us but with a new top speed of 15kph (10mph)

We made a quick stop for a photo ‘op’ in….China?  Yep.  We followed the China border for a hundred kilometers mesmerized by the huge wire fence in the middle of nowhere that was built to keep out/in…who?  Certainly didn’t keep these kids from collecting some Chinese dirt on the soles of their boots:

We past mountain lakes who competed with mountain skies for true blue.

We past herds of Tajik Yaks and packs of Afghan Camels.

We rode through mud, dirt, on potholed tarmac, through soft sand, across rivers, through snowstorms, through rain, and over the 4655 meter high (15,275ft) Ak-Baital Pass.  Bala, we love you.  Can I get some applause out there my dear readers for Bala!  We crossed paths with motorcyclists on 1000cc BMW’s, Hondas, and KTMs all riding solo.  Bala made it with driver and passenger through the most challenging stretch of highway she or any motorcycle will likely see in their life.  Sorry for gushing…  yes, I’m a proud father 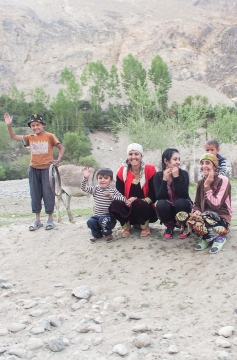 Dropping into the Wakhan Valley from the high mountains of the Pamirs we encountered some of the friendliest people I have found in all my travels.  Old weather worn faces flashing smiles full of gold capped teeth, little kids wriggling with excitement like golden retriever puppies, adolescent girls with shy eyes…all waving as you pass.

We sat at one of our campsites in Tajikistan, taking in views of Afghanistan AND Pakistan (for a long time we followed a part of Afghanistan called the Wakhan Corridor, a thin 10 kilometer [6 mile] wide stretch of Afghanistan that separated Tajikistan from Pakistan and the enormous Hindu Kush mountains which are so big its possible to see them from Tajikistan)

We ate lots of apricots, and drank homemade juice made from a wild mountain berries

Driving through small a village a huge black dog comes rushing out of the woodwork in full attack-mode straight for us and Bala.  I quickly hit the throttle to leave him behind just as we come to the top of a hill where, on the other side a huge trench spanning the length of the road awaits us.  Brakes lock, tires screech, WHACK goes the front suspension, CRASH goes the bike.  Our first little spill results in a few broke bits on the bike, a few bruises and a new disdain for motorcycle hungry dogs

We camped at 4,000 meters, We comfortably sipped vodka while while listening to the wind blow flakes of snow and pellets of hail into the side of the tent.  We were at such high altitude that we had to wait 45 minutes for our little beer can stove to cook some rice.

As we pass through a small village a little kid no more than 6 years old stands precariously smack in the middle of the road with his hand extended and a sly smile on his face. Rapidly approaching on the motorcycle I’m thinking to myself “What the hell is this this kid doing? Why isn’t he moving out of the way?”.  I move a little to the right so as not to brush up against him as we pass and he moves in the same direction shrinking my gap…what the hell is he up to?  Then, just meters before and just in time, I figure it out…I extend my hand and….Smack! ROLLING HIGH FIVE! (This was later repeated many times in other villages along the way)

I saw Afghan village of mud homes and was shocked to see that they all had satellites on their roofs.  I wondered, are they just as excited for the new season of Game of Thrones as the rest of the world seems to be?

I was not surprised to learn that the monthly wages average in Tajikistan is just $135 and 47% of people live below the poverty line.

I was surprised to learn that, despite being the poorest country in the former USSR, Tajikistan has a literacy rate of 99.7%.  Higher than France, Denmark, Germany, and America.

Passing through another village we see three boys, maybe 10 years old in the road.  A fight is brewing.  One kid pushes the other who responds in kind with a slap on the face.  They lock in a violent grip, one with the others shirt in his dirty little hands and the other reaching for a tuft of hair as Bala’s engine thump thump thumps closer and closer.  At the exact same moment they both look up, see Bala and HUGE smiles wash away their anger. They release their respective victims so the hands can wave wildly in the air as they turn on their heals to watch us pass.  100 meters after we had passed them I could still see them waving in my rear-view mirror.

We spent over a week in Dushanbe, the capital of Tajikistan hunting for visas.  We visited The Tajik Ministry of Foreign Affairs, the Uzbekistan embassy, and the Turkmenistan Embassy a total of 12 times.

We saw the “Worlds Tallest Free-standing Flagpole” in the middle of Dushanbe, proud may they be.

We found an Indian restaurant and re-lived some happy days.

We slept next to rivers and lakes, near areas still riddled with land mines, and in the apartment of a group of foreign NGO workers on the top floor of a huge building

We discovered that Tajiks are completely crazy about watermelon.  It is EVERYWHERE. Just as in France you see people walking around everywhere with baguettes under their arms, In Tajikistan everyone on the street seems to be carrying a watermelon home. 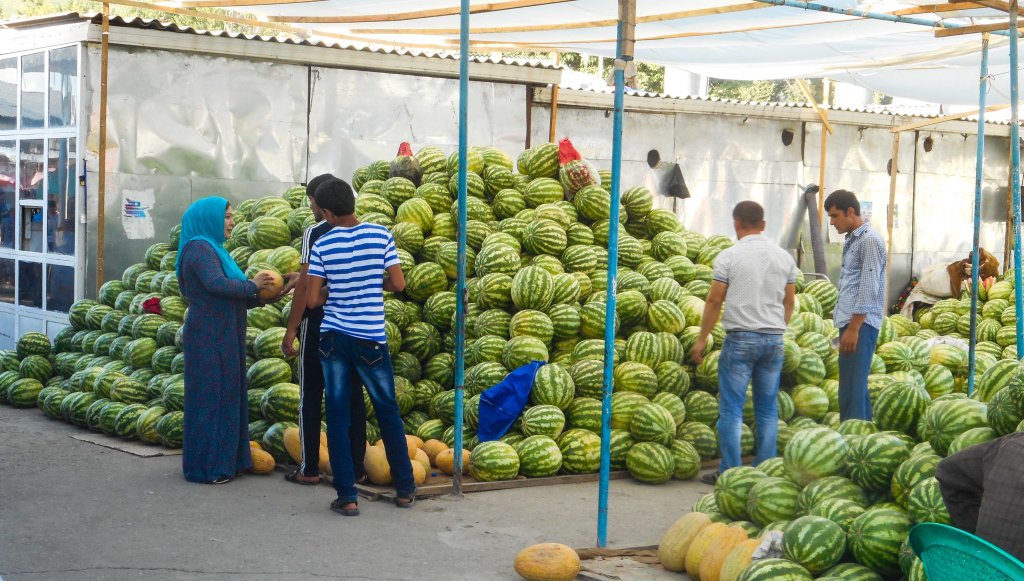 Need to restore some of your faith in humanity?  Some random acts of kindness bestowed upon us:

Things that were broken by the Pamir Highway:

That’s all I have to report for now.  This blogpost comes very late (due to busted computer)…we are already in Georgia but I will hopefully get another post out soon to try and get caught up.

One thought on “Tajikistan & The Pamir Highway, with Guest Appearances by China & Afghanistan”