You may remember my mention in my last blog post about Valentine, our “guru” who to our knowledge is the only other person to have done the route we planned to do.

If there is one thing that we learned from our attempt at this trip it is that Valentine is no guru.

In fact he is more like a superhero, endowed with powers far beyond the average intrepid adventure seeking idiot, of which demographic shoes we shamelessly filled.

Yet we tried our best to follow dutifully the sound of his pipe, one GPS coordinate at a time.

I guess its safe to say that we didnt, in the end, reach our goal. At least not in kilometers covered. But the goal of radical adventure and of finding that remoteness, that patch of untouched of land? That we accomplished.

The trip was essentially a massive test in problem solving, adaptability, and endurance, all administered with a healthy dose of inexperience and comedic relief.

The problem solving, which had begun long before any flights were purchased, continued the minute we all found ourselves in Irkutsk, a small 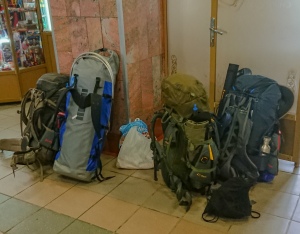 Siberian city with an international airport. After sorting through all our gear, divvying it up and cramming it mercilessly into our backpacks, in a way we were quite impressed that we fit it all in, but there was still some math that wasn’t adding up. There were three of us, and four huge backpacks, which had a combined weight of about 93 kilos (205lbs). The fourth being the two person kayak.

Problem solving commenced and a throng of ideas poured forth, with contributions coming from as far as Germany and Nevada. Tyler was a big fan of tying the fourth pack to a long pole with each end resting on the respective shoulder of two intrepid idiots. This would have earned us style points no doubt, but it met resistance with Bartek and I. Valentine had used a little two wheel cart thing during his trip, although his blog dropped a few hints that it hadn’t worked out so great. Nonetheless we thought it worth consideration.

We spent the better part of a day wandering around Irkutsk looking for bear spray and firecrackers to ward off unwanted camp visitors, picking up other last minute supplies, and all the while keeping an eye out for two wheel carts with monster truck wheels, with none to be found.

The next morning the alarm went off at 6:45 so that we could hastily finish the last bit of packing that had to be done and get to the train station on time to catch our 8:30 AM train to Ulan-Ude. Miraculously we succeeded in this mission, arriving proudly at the train station with even a few minutes

to spare to order an instant coffee from the babushka at the station cafe. We were puzzled to find that our train was not showing up on the board that announced which track each train would arrive and depart from. Inquiries were made and a local seemed to take some small pleasure in explaining to Bartek that ALL trains in Russia depart from “Moscow time”. Irkutsk being 5 hours ahead of Moscow, that meant that our train would not show up on that board, or any track, for quite a while.  I think this was the first time one of us referred to ourselves as “Team Idiot”. It wouldn’t be the last.

Tyler was not too keen on waiting this one out so the problem was solved by paying a private driver to leave then and there and get us to UIan-Ude.

After a night spent wandering the streets of Ulan-Ude, basking in the gaze of father Lenin and in the shadows cast by soviet era block housing, we were back on the road heading north east, this time our trajectory was completely away from any and all cities, in fact the highway we were taking literally leads to nowhere, it would eventually be swallowed up by the taiga somewhere not long after our next destination, Kurumkan.

The driver of our transport to Kurumkan was a friendly Buryat* who happened to be from Kurumkan, which was an amazing coincidence considering that it was over 400km away and had a total population of just a few thousand people. His name was Stas.

*Just a quick side note….The Buryat people make up the largest indigenous group in Russia. They inhabit the lands around the eastern side of lake Baikal, mostly in the Russian state of Buryatia (where we found ourselves bumping along in the van of Stas) and were traditionally a nomadic people who kept animals, hunted, and fished to survive. Closely related genetically to their Mongolian neighbors, their language (which is still widely spoken in Buryatia) is also similar to Mongolian. The religion they practice is a blend of shamanism and Tibetan buddhism, more on that later. 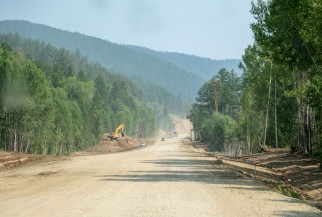 Back on the road to Kurumkan, civilization slowly started to take a back seat to dusty roads and taiga. Traffic dwindled to the occasional beat up Lada (the old cars you probably associate with soviet times), and old work trucks and bulldozers who were doing their best to maintain the roads. 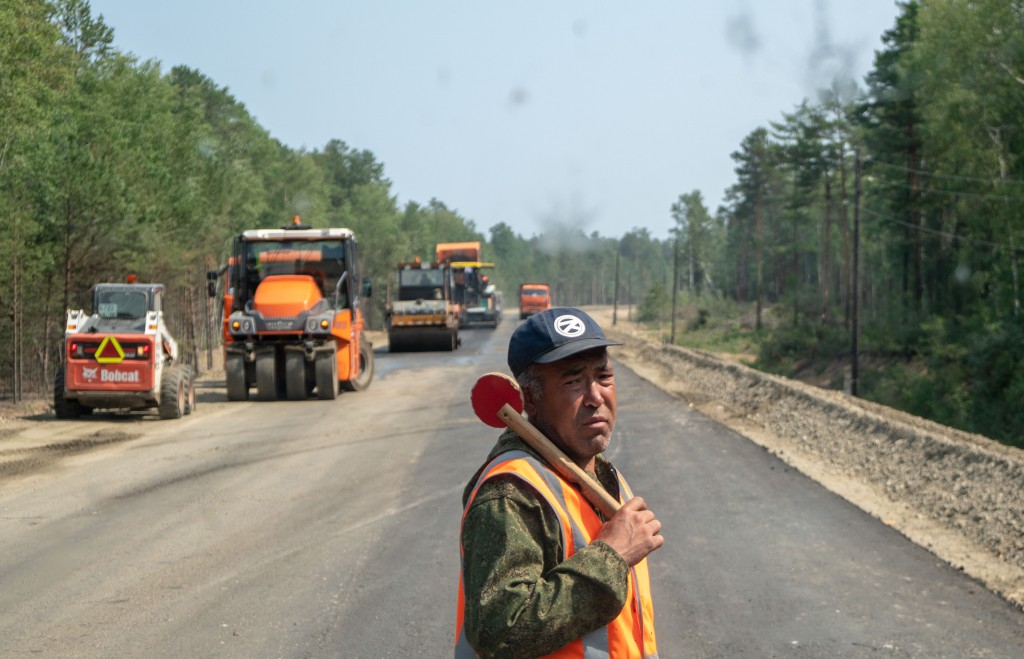 With hours yet to reach our destination we had plenty of time to drill Stas for information, help, resources….whatever we could squeeze from him. We were well aware of our need to connect with locals who would be

sympathetic to our plan, and/or would be motivated by whatever we had in our wallets. We ran the whole plan by him.  It’s not possible, he said. The rains have been too heavy, the water levels of the Garga river are too high. No truck will be able to get you all the way to where you need to go. He did, however, know someone who had a big 6 wheel truck that would be willing to negotiate with us to take us as far as the road would permit, no promises on how far that might be. He would make some more inquiries when we arrived.

Arriving in Kurumkan felt like frontierland. The quietness of the streets, the mountains looming in the backdrop, the people making trips to the nearest public water spicket (most of the town has no running water), and the cows and horses wandering down the main thoroughfare through town.  One had the feeling that not far beyond the town limits lie the wild west, or east as it were, where the eternal battle between nature and man was being fought out, but here the underdog was winning.

Some weeks before we arrived my friend Dan from Moscow had made a bunch of phone calls to the one hotel in town on our behalf, asking for someone who had a truck that might be able to help us. While we waited for Stas’s call we dialed the number Dan had given us for a guy named Vlad.

When Vlad showed up at our hotel, one of my first comments I made to my brother was that I thought he had an honest face. It would be some time

before that sentiment could be confirmed. He echoed what Stas, the women at our hotel, and the drunk groundskeeper had told us. Water levels high, roads washed out, slim chance of any truck making even the half of the trip. He had a new proposal…horses. Horses. This novel idea seemed worth considering. It would certainly add a new dynamic to the adventure. He said he would make some calls and do his best to get some costs and other information.

The next morning Vlad had an answer for us. He found a guy with horses who would take us, but the guy said the water level was still too high to cross the river on horseback, he would agree to take us if we left the following day. It would take somewhere between 2 to 7 days to reach our destination. Two to seven days? Yea.  At this point (having heard no news from Stas) this was literally our only option. We agreed.

Finding ourselves with an entire day to kill and nothing that we could do to further our personal agenda, we were happy to accept Vlad’s offer to show us around town. But first he wanted us to register with the local…. bureaucratic institution? A building we deemed the “Ministry of Ministers”, ubiquitous in every Russian town or city.  The local haven for pencil pushing bureaucrats and dodgy “fixers” – ready to help you get your divorce papers, acquire some property, register to vote.

Next we checked out the local Buddhist monastery and temple, where a lone monk sat conscientiously chanting while rocking back and forth surrounded by buddha icons and colorful buddhist art that oozed psychedelia. We made our rounds, spinning the  prayer wheels and hoping for the best that buddha could offer us on our journey.

Next we headed to the nearby Barguzin river, where high water levels were confirmed and mourned.

Then we had the idea to go fishing. So Vlad picked up a friend who literally carried a tin can full of worms with him and we struck off into the Siberian wilderness in Vlad’s 4 door sedan until the “road” became a swamp. From here we would walk to another swamp, which is where we were expected to throw in our lines.

This was our first taste of one of the greatest perils of wild Siberia. Tiny, relentless, sanity thieves. The mosquitos will cause your mind to rattle in frenetic abandon in search of some peace. It started to become clear why these people had converted to Buddhism. And when Vlad told us “this is nothing, they will be much worse where you are going” It was these little bastards, not the threat of bears, crushing rapids, or random wilderness related injuries, that made me think for the first time that maybe this idea of ours was a big mistake.

Our fishing mission was a failure, our only consolation was that it was a hasty failure. Within 20 minutes all involved agreed that the only thing that was biting were the mosquitos. So we waded back to the sedan and headed back to town.

The afternoon was whiled away with trips to the ATM (which gave very limited amounts of cash during each transaction) to pay for our horses and to amass a small fund to be used for the next time we had to buy our way out of trouble, and by sitting on the steps of our new abode. Vlad had insisted we move to a flop house on the other end of town that shared a wall with the local mechanic shop. The only other tenant was a politician from a nearby town who we called “The President”. He explained to us that in Russia being a politician is a very dangerous job. Hence he was laying low here in Kurumkan until whatever threat that loomed over his head blew over.

We sat on the steps and passed the time by watching a mangy troop of dogs diligently patrol the area, with occasional appearances made by cows. Periodically some local would cruise up in their jalopy eager to meet the three idiots who wanted to cross the Ikat pass so they could float down the Vitim river. News had spread quick in town. Invariably one of the first questions they would ask would be “How many guns are you bringing”. Our answer of “none” was always met with a laugh that seemed to serve only the purpose of reminding us that we knew nothing about their world.  I think they secretly applauded the effort that had gotten us thus far, but were overtly dubious about our abilities to pull this off.

The next morning the real adventure would begin.

If you want to see a few more photos from these first few days just click on this link.