This morning I woke up in Central Asia.  Bishkek, Kyrgyzstan to be exact.  Maybe right now you are saying to yourself “Bishkek?  Kyrgyzstan?  Where the hell is that?  Whats going on there?”  I promise I will answer some of those questions in my next post.  But for now maybe you would like to know what I’ve been up to the last 8 weeks:

We traveled 800 kilometers on train and 2000 kilometers (1,250 miles) on Bala through Northern India and Nepal.  Number of mechanics visited: six.  Here is our route:

We did a swan dive into everything that makes India extravagantly mystic, surreal, overbearing, sacred, grimy, and unceasingly captivating in Varanasi, one of the oldest cities in the world.  It was one of my favorite places I visited in India.

On our train journey from Delhi to Gaya we lost Bala (she was supposed to be on our train).   For 24 scary hours we had no idea where she was.  After some funny interactions with the railway stationmaster we found her….800 kilometers away.

We took the wrong way from Varanasi across the Nepal border to Kathmandu. We spent three exhausting days sucking dust into our lungs and bumping along atrocious cratered dirt roads like these: 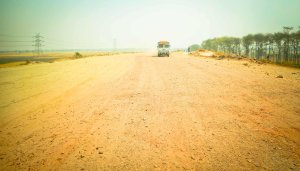 After months of eating dodgy food in India we decided to do poop tests at a local hospital to see what kind of little animals we were harboring in our stomachs.  One of us walked with a clean bill of health, the other with a virtual zoo of animals….numerous bacterias, giardia, AND amoebas.  Guess who…

Border crossing experience 2: Nepal to India, Western Border.  We had to wake up the sleeping Nepalese immigration officers.  There was not a single person, car, or motorcycle crossing the border.  A man literally had to come “unlock the gate to India” for us so we could pass through.

We witnessed true devotion to faith…hundreds of people bathing in and drinking the water of the sacred Ganges river… where the level of coliform (human and animal feces) is TWO THOUSAND EIGHT HUNDRED TIMES!!! the level which is considered safe by the World Health Organization.  Now that’s devotion.  Thankfully the newly elected prime minister of India is launching a major cleanup mission for the river.

We traveled to the future.  The day we arrived in Nepal was their New Year eve.  Goodbye 2014, hello 2071.   Despite being the year 2071, we found that Nepal still does not have stable electricity (The entire country, including the capital of Kathmandu only has power about 60% of the time.)

We crossed the Ganges 4 times on Bala in four different places, once we were rowed across on a boat.

We spent 8 days hiking up the Langtang Valley in the Himalayas near the border of Tibet.

In Kathmandu I applied for my third India visa in 8 months.

We passed through a very inconspicuous dusty city in Bihar, the poorest state in India, called Motihari.  We were shocked to discover that it is the birthplace of author George Orwell.

At the Iranian embassy in New Delhi we had a nice chat with Freddie Mercury’s cousin. 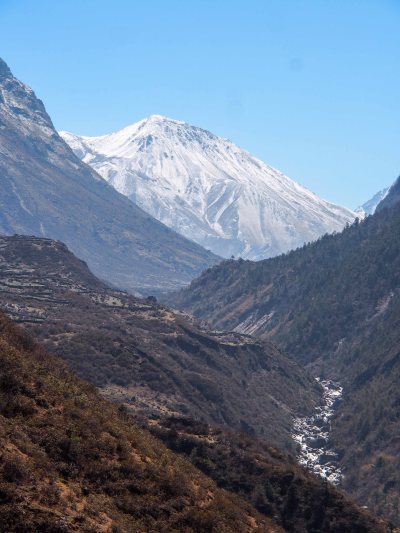 I was alone on the summit, with a big blue sky close enough to touch and surrounded by icy peaks that rose even higher (The one right behind me is over 7,000 meters [23,000 feet].   This was the view from the top:

I made friends with Yaks. 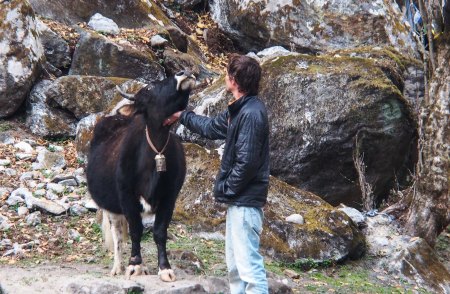 We watched a procession of men carry a body to the banks of the Ganges, place it on a pyre of wood and set it ablaze.  As the sun set into the river we watched the fire burn and the smoke rise for two and a half hours until all that was left was a small pile of hot coals.

Memorable menu items from the last months:  Dhal bhat (Nepalese set meal of rice, veg, and a watery lentil broth), momos (Nepalese dumplings), lots of trailmix and porridge, tons of mangoes (just came into season), and the best samosas we ever tried (found at the tiniest little shack on the side of the road in Bihar)

We took a horrendous 10 hour bus ride packed like sardines into the bus with at least 15 additional people on top of the bus…on roads like these: 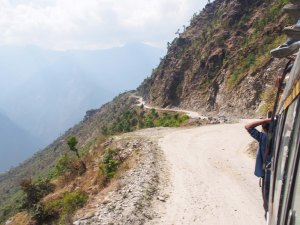 We ate dodgy fish at a restaurant on the shores of the lake in Pokhara and I suffered the consequences for days after.

We hiked to an ancient glacier high in the Himalayas.

In in a dusty town in Northern India called Bodhgaya, we mingled with Buddhists pilgrims, soaking in the nirvanic vibes that fall like leaves from the branches of the Bodhi tree where, 2500 years ago Buddha found enlightenment.

Three weeks and 1000 kilometers (625 miles) later in Nepal, we visited the site where Buddha was born.  It was enclosed in this not no nirvanic building:

We camped for a few days just outside of Bardia National Park.  We saw a couple rhinos and a tiger (I missed it, Magdalena caught a quick glimpse).  It was far away but close enough to be exciting just to know it was

near.   For all that we didn’t see of the tiger itself, we DID see some other gifts he left behind…some tracks and some hairball vomit

The day that we cruised back into Delhi, the World Health Organization released a list of the 20 most polluted cities in the world…guess what was number one.

We said goodbye to the team at garage team at Vintage Rides, who were instrumental in making this whole trip a reality.  Right down to the last minute.

Back in Delhi we spent a very hectic week and a half preparing for our final departure from India.  Mechanical

work, organizing spare parts for the journey west, catching up with old friends, and getting Bala boxed up for the trip to Bishkek, Kyrgyzstan.

We said goodbye to India (with a tear in the eye) and boarded a plane to Kyrgyzstan.  It’ll be all overland from there.  14,000 kilometers (8700 miles) to go.  Bala is in good shape.  We are excited for new places, faces, and roads.  The journey west begins.

Thanks for reading.  Please consider donating some money to my fundraiser (I’ll even send you or someone you know a postcard from somewhere along the way!).  Click here for more info: http://www.crowdrise.com/thescenicroutetospain