Arriving in Bishkek from India I experienced the most extreme culture shock in all my traveling years.  A bright and clear late afternoon sun shone across open fields of green agriculture as we drove from the airport into the city.  A pedestrian stepped into a crosswalk and our taxi driver stopped for them!!! Little white puffs of cotton sauntered down through the rays of sunshine from the branches of cottonwood trees creating a fairytale-like atmosphere ….cottonwood trees with green leaves on them….GREEN LEAVES I TELL YOU!  Observing a street corner as our taxi waited at a red light, not a stray dog was to be seen nor a car horn to be heard.  No dust in my eyes, no trash on the sidewalks, no cries of the Chai wallas selling their brew.  India is behind us (and already very much missed), new adventures await. 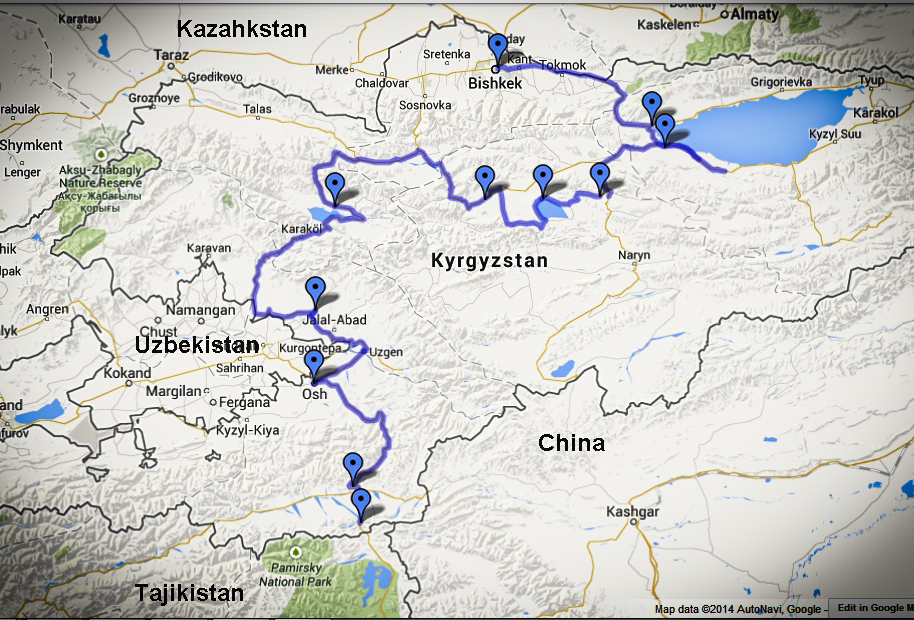 We participated in the circus of getting Bala cleared through customs.  We ran around from one customs office to another collecting a myriad of forms.  We were not free to go until we had acquired the requisite number of bureaucratic stamps to be added to our forms.  The magic number: 15.

We said goodbye to Hinduism and Salaam Alaikum to Islam.

For almost a week we stayed with a couple from the UK and Latvia who bought an old Russian Ambulance in Georgia (the country not the state) and struck out for Mongolia.  They ran out of money in Bishkek so for now call it home.  They put a roof over our heads and sent us off with a wealth of advice for the road we had ahead.

I re-learned how to drive on the right side of the street.  Even though strangely enough, half of the cars in Kyrgyzstan have the steering wheel on the right.

While still in Bishkek, after a major mechanical scare, we thought Bala had died.  We had a brief a panic attack, and then when she was resuscitated with the help of a local mechanic we vowed that we would not be so quick in the future to doubt her resilience.

20 days and 1000K (625miles) later our vow was put to the test as we crawled into the city of Osh, practically pushing Bala, she was so sick.  We were saved by some Swiss expats who rent motorcycles to tourists in Kyrgyzstan.  They loaned us tools, mechanics, and a place to work.  Problem solved.  Thanks Muz Too.

We spent over a week in Osh, the second largest city in Kyrgyzstan, dealing with mechanical issues.  We met Laura, Chris, & Arjens, veteran overlanders.  They accepted us into their club and we spent a week eating cherries troubleshooting motorcycle problems, and waxing geographical.

We got our first look at the world of “Overlanders”.  Central Asia is full of them.  They are a subculture of travelers apart from the backpacker scene.  These are people who have their own vehicles…motorcycles, buses, bicycles, trucks, and cars and have struck out to cross vast regions of the world.  They are almost invariably older than the average backpacker, most having already done that.   Looking at many of them with their big BMW 800cc motorcycles with metal lockboxes and GPS and a swath of fancy gauges and dials…and then looking at Bala dwarfed by their size, with our backpacks haphazardly strapped to some crappy Indian made luggage rack using some bungee cords, we wondered, “Where do we fit in?”

Our speedometer and odometer broke while the bike was in transit from India.   Time stands still.  We take things slowly as they come….very slowly.  And I can’t figure out how we keep waking up in new places even though we haven’t moved one kilometer in weeks.

We camped next to hundreds of sheep.  Of course I tried to make friends.

We camped next to rivers.

We camped next to lakes.

We camped surrounded by snowy mountains.

We camped in canyons.

We camped 20 meters from the Kazakhstan border. 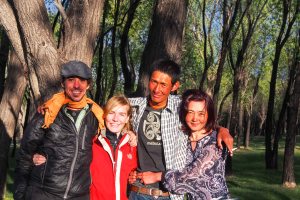 While taking in a sunset next to a lake were approached by a local couple who we gathered were having an affair unbeknown to their wedded counterparts.  We used our bicycle pump to inflate their flat car tire.  Next thing we know they have purchased such necessities as: A bottle of vodka, two liters of beer, a pack of cigarettes, and some ramen noodles…and as the air slowly escaped once again from their newly pumped-up tire, we spent an entire evening until just before midnight eating, drinking, and merrymaking with our new friends (who, by the way, spoke no English).

We spent over a week in Bishkek waiting for Bala to arrive, walking the streets, getting lost in the gigantic bazaar, admiring the backdrop of snowcapped mountains, and adjusting to our new cultural surroundings

We fell in love with Kyrgyz people and their friendly and curious nature.  It was so normal to wake up to some noise, poke my head out of the tent and find some Shepard with his sheep or horses waiting to start the conversation.  And it wouldn’t matter how many times you told them that you spoke no Russian, it did nothing to halt the “conversation”

We drove a couple hundred kilometers on a muddy dirt road to reach Song Kul Lake where we were greeted by absolutely no one.  That’s the beauty of Song Kul.  No electrical lines, no towns, no cars, no roads (you can just drive across the grass wherever you feel)…just a few dozen yurts inhabited by Kyrgyz nomads and THOUSANDS of sheep and horses running wild.  (If you didn’t see my previous post with the link to some video footage of our time in Song Kul you can CLICK HERE to watch it)

Bala’s oil pip began to leak.  We found a Russian refrigerator repairman with a weathered face and friendly vodka whetted smile who did a pro job of welding a piece of refrigerator pipe to replace the broken part of ours.  The next day we blew a fuse.  No auto part store carried what we needed.  Someone suggested a TV repairman.  We found the guy, he had the part, it fit perfectly.  So Bala is now part refrigerator and part Television.  I’m sure that by the time she reaches Spain she will have a bit of toaster and microwave in her as well.

We crossed rivers, slopped through mud, drove through snow and hail storms, over mountain passes, and across icy/snowy roads

Everywhere we went, at the sight and sound of the motorcycle roaring down the road, little kids would  run as fast as they could from the doors of their homes and yurts to reach the side of the road where they would great us with huge smiles and little dirty hands waving in the air.

Need to restore some of your faith in humanity?  Some random acts of kindness:

We prepared to leave Kyrgyzstan and head for the Pamir Mountains of Tajikistan…which would prove to be our most daring and memorable adventures yet.  More on that soon.  Until then, hope all is well on your side of the world.  (This post is a bit late and covers our adventures from May 18th through June 18th….I will get another post out soon to bring it all current)