This morning I woke up in Colombo, the Sri Lankan capital, and I finally went to pick up my new Indian visa.  Since being in Sri Lanka, I have visited the Indian Consulate and Visa Center 12, yes TWELVE times.   Why did I need a new visa?  Because I lost my passport which had my old one in it.   A seasoned traveler once said “Travel is glamorous only in retrospect.”  But I am not complaining…

…In the last 5 weeks I have been on 6 islands in two countries and have swam in the Bay of Bengal, the Indian Ocean, and the Laccadive Sea.

On the first day of 2014, I watched the sun rise as I drove Bala towards the Island of Rameshwaran in Southern India

I tried to make friends with the cows in the old Danish fort in Jaffna, Nothern Sri Lanka.  I did not succeed. 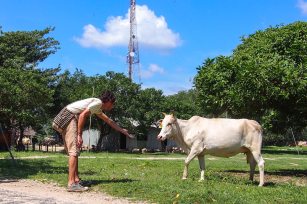 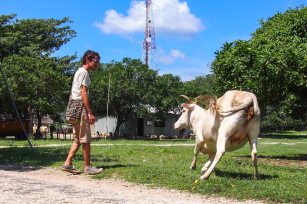 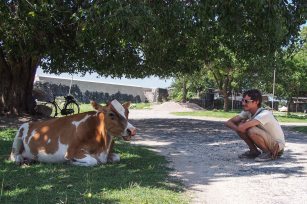 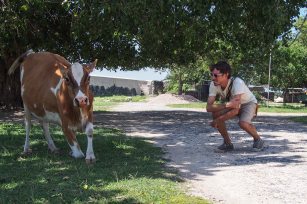 Seven months ago I spent some days exploring the Tibetan region of China by motorcycle with a Swiss girl named Magdalena.  We reconnected in Sri Lanka to resume our mutual desire to conquer the world, two wheels at a time.

We rented a scooter we named Joggeli (Swiss-German for ‘Little Idiot’…pronounced Yogalee) in the Hill country of Sri Lanka (Bala, who is waiting for me back in India, doesn’t know this and I would like to keep it this way so Sssshhhh!!!).  We drove him 500k (315 miles), often on horrendous (= adventurous) roads past beautiful hills and mountains, endless plantations of tea, and lots of smiling Sri Lankans.

We rented a scooter we named Sweet Lime and drove her 200k (125 miles) through the Northern region of Sri Lanka past coconut palms, deserted coastline, wild peacocks, hindu temples, and…. lots of smiling Sri Lankans

I celebrated my birthday in a small town in the Sri Lankan Hill Country with some rare treats (rare at least on the Indian Subcontinent)…A bottle of red wine, some Swiss cheese (imported by Magdalena), some Spanish olives, bread, and in lieu of Italian Salami which evaded us…a can of mackerel.  And of course candles and cake.

I searched for the casino that my great-uncle owned in Colombo, back in the 1970’s  I found a vacant lot

I drove Bala across the Indian Ocean.

I drove through the Indian Ocean on a bus.  Don’t believe me…check it out:

I crossed the Andaman Sea on Sweet Lime 3 times by bridge and once by boat.

For the first time in my travels I explored part of a country that is recovering from a recent war.  Four years ago Northern Sri Lanka was a war zone…sadly it is still quite evident.  Military presence is everywhere, certain areas are still off-limits and while driving through the islands I saw countless (literally about one in four) houses that were either abandoned, bombed out, or both.

I ate LOTS of mangos

Completely captivated and hypnotized by the sounds of chanting, the sights of bare chested Hindu pilgrims sprawled out in prayer on the floor, and by the smells of burning incense, I wandered barefoot through the 400 year old Meenakshi Amman temple in Madurai

I made my first new friend in the South of India, Kingsly, who helped me with all sorts of things and was nice enough to give Bala a safe home while I went off to Sri Lanka

I paid a whopping $25 entrance fee to get into the “The Worlds End” national park in central Sri Lanka.  The main attraction is a cliff that drops over 1000 meters straight down and offers views all the way to the ocean 100 kilometers away.  This was my view looking straight down towards the 1000 meter drop: 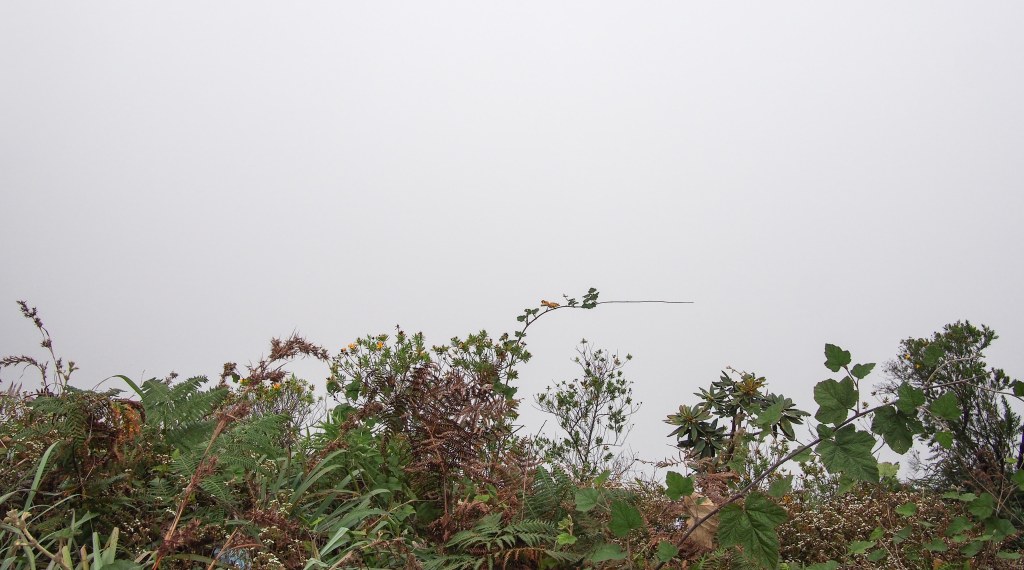 This was my view looking west towards the Indian Ocean:

While lost in the Hill Country in Sri Lanka I stumbled across a tea plantation and got a full tour of how the tea is processed.

I was surprised by how developed Sri Lanka is, where I went to my first real supermarket in months, where the streets are clean, and where people actually follow the traffic laws.  I missed India, where life, at its most raw and gritty, is thrown in your face with a “like it or not” attitude.  Lucky for me I seem to like it.  🙂

Tomorrow I get on a plane and return to Incredible India, to Madurai, and to Bala.  There we will begin the next big leg of our journey, from South to North.

7 thoughts on “From North to South, Sri Lanka, Madurai, and beyond”