Wilderness is not a luxury, but a necessity of the human spirit.

Before the ink had barely dried on the passport stamps which had served to get me from Indonesia all the way back to Barcelona (More on that here), mostly by train…I had begun planning another adventure. My faithful travel companion Magdalena was back in Zurich and had just started a new job, it might be a while before I could tempt her to quit 😉

As luck would have it though I had befriended a clever and experienced Polish guy named Bartek here in Barcelona whose travel resume closely resembled my own. Long wilderness trips, alpine mountain climbing, extended overland adventures in cars and motorcycles, exploration of countries that make most governments’ State Departments’ lists of “Better to Avoid”. We set to work hashing out a plan, which began to take the shape of a rather extreme river kayak trip in a remote part of Siberia. We would have called on our collective experience in wilderness river rafting and kayaking to bring this plan to fruition, unfortunately this collective experience amounted to exactly zero. But, to borrow a literary line, “Ignorance had never stopped me from taking action before”. And so the research began.

We were not searching for thrills and class V rapids. Afterall we didn’t know anything about that. What we knew was wilderness, what we wanted was remoteness, to stand on that patch of earth that had never been stood upon. To share the open air with the bears, the wolves, and the elk, to ride the currents with the trout and taimen and pike, to go to sleep a hundred miles from the nearest human under a billion stars, to let memories of our modern world mingle with the ash of our riverside campfire.

We wanted a relatively non-technical river, one that wouldn’t kill us but also one that would not put us to sleep, one that was remote and not full of a bunch of other people who have the same idea as us that we would have to share the river with. You can stare at a map of Siberia all day long and identify tons of rivers, but how the hell do you know which fit this description? It’s not like you can drag the little google map guy onto the river to see the google street view and get an idea of what the nature looks like, of how dangerous the rapids are, of how many other kayakers we might cross paths with. In-depth searches on google was not turning up anything either, at least not in english.

We finally started to search in Russian using google translate and found what we were looking for in the form a a super detailed blog written by some Ukrainian guy named Valentine who’s amount of experience in long distance river kayaking placed him somewhere between a guru and a god. And the good news was that we could not find online evidence of a single person other that Valentine who had ever done this route. We decided to set off in his footsteps.

We fly into a small Siberian city (Irkutsk). From there it is two days travel by train and bus to a small town where we will hire a 4×4 to take us as far as the the road will allow us to go into the Siberia taiga. Depending on how far the car makes it we then might face a 60km (38 miles) walk through the taiga carrying on our backs provisions for 6 days as well as our boat (about 28kg or 63lbs each) to reach the mouth of a small river. From there the plan is to travel 1000km (625 miles) of the river over three weeks to a tiny outpost with 150 inhabitants that is completely inaccessible to the outside world overland except by boat. This tiny outpost gets food and supplies delivered every 6 weeks by a little propeller powered plane when the weather permits. The idea was that we could catch a ride back to civilization on this plane….that is assuming that we remain on schedule to arrive there before the plane takes off 😬.

The river itself is exactly what we were looking for, plenty of easy stretches, but also plenty of small rapids. As for “remoteness”, well the necessity to walk three days to reach our start point sure gets us off to a good start. Then once on the river, in the 3 week time it takes to do the trip we will only pass through one town that is actually connected by road to the outside world and has mobile connection. Other than that we will pass through 2 small outposts each with about 100-150 inhabitants, both of which are only accessible by boat or air. Basically, anything that happens we are pretty much on our own. Remote? Check.

For food we would rely on whatever basic supplies could be bought from the locals along the way, and we hoped to be pulling a lot of fish out of the river. The bigger problem than obtaining food would probably be to keep it out of the mouths of the hungry bears that inhabit the region.

If I decided today to begin packing for a motorcycle trip that would take me through 30 countries over the course of a year, I could probably be ready to go in a couple hours. But being completely new to long-distance river kayaking the process of planning and packing became a full time job. Priority number one was choosing our craft. We were able to connect with Valentine, the Ukranian river guru who was gracious enough to answer a bunch of our stupid questions. On the subject of boats he recommended a Russian made inflatable two person kayak weighing about 16.5 kilos (36lbs). The price was great, and it had his stamp of approval.  We were about to buy it when we thought “Let’s post some questions on some US kayaking enthusiasts forums and see what they think about this choice”.

So I started a thread on two different websites frequented by river fanatics and explained a bit about our trip, ie no experience, 3 weeks on a Siberian river with class II and III rapids, super remote location. I linked to the boat Valentine recommended and aside from their thoughts on that choice, I asked for any other general tips or ideas to help us in our planning. The replies began to come in.

I think my favorite line was from a guy who when referring to our choice of boat said,

“This is not a trip to do in glorified pool toys.”

Here are a few other selected quotes from the responses we got:

“I have to admit, this sounds like a terrible idea…”

“I am not saying don’t do this trip, I am just saying take it seriously. If a few crazy Russians did it on inner tubes 12 years ago that doesn’t mean you should as well…”

Ok, neither our plan nor our boat were being very well received in the American river enthusiast forums. So we sought validation elsewhere. The Russian wilderness rambler and pioneer is a particular sort. I had encountered some of them in my last trip to Siberia. They are well prepared, confident, and probably got married wearing full camouflage fatigues. They would be quick to tell us we were silly little boys for attempting this is if that’s what they truly thought.

And so with the help of Google translate we posted the same message in Russian forums and got very different responses than those from the US forums. The Russians, many of whom had rafted the same river (further downstream) all seemed to think we would be just fine with a precursory warning to be careful and take it easy. They also applauded our choice of boat. Validation…check.

So with confidence slightly bolstered, and after weeks of researching other options and getting all sorts of feedback we decided to trust in our guru and stick with the original plan. Here is a photo of Valentine on the same river we would do and in the same boat he recommended to us:

It was around this time that I got word from my brother that he was interested in joining the trip for the first half (which is the half that no-one does). The addition of a third person to the expedition was a welcome one and so it was we had to find another boat. After tons of research and guidance from forums in several languages we settled on a single person packraft. Which is a very different animal from our 2 person kayak but would help us reduce weight and add some diversity to our fleet.

In the meantime, our russian boat got held up in Spanish customs, which was a whole drama in and of itself. It was also around this time (2 weeks to departure) that we got an email from a Russian friend of mine (Thanks Dan!) who was helping with some of our planning. The subject line was “Massive Flooding” and the message included a link to a Russian news article. Apparently the exact region where we would be going was under a state of emergency. Heavy rains had washed out roads and bridges and flooded entire towns. The river we would be rafting, which normally has a water level of about 2 meters, was at 5.3 meters. Super.

Just as the flooding story was dominating our thoughts the customs fiasco was finally resolved and the boat was delivered to my house. We

ripped into it and inflated it on my terrace. Our reaction…Holy shit! It’s huge!

With our new ship in hand we turned our focus to getting a bit of experience. We drove 3.5 hours from Barcelona to do a 2 day white water crash course with an instructor. We learned some basic rules of the river for navigating rapids and received a lot of attention from the local rafting guides who wanted to meet the two guys who were going through with such a plan. They all assured us that we would be just fine, that our plans did not include anything that we couldn’t handle and that the the boat was in fact an excellent choice. 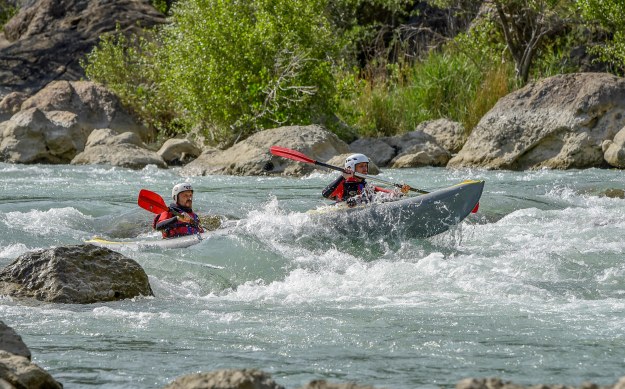 Test run of our kayak during our white water crash course

This blog post does zero justice to explain just how much preparation has gone into this trip, but suffice it to say it was a lot. As usual my parents played an integral role of “command center”, assisting in organizing gear that I had ordered to their house in The States and in making sure we had enough beef jerky to survive a Siberian winter. The last days we watched the weather closely and were happy to see less rain on the forecast and water levels dropping.

This morning I landed in Siberia, Irkutsk to be exact. It was strange to be returning to this place I was in just last year with Magdalena when we were taking the Trans-Siberian back to Europe from Asia. I never imagined I would be back again so soon and under such pretenses. The immigration officer checked my visa, stamped my passport, and as she handed it back she said “Good luck”.

I’m OK with that.