I’ve got a new adventure on the horizon, but before I introduce that I suppose I should try and sum up my last one. I would normally have done this while I was traveling and would have broken it up into 2 or 3 blog posts, but as almost a year has passed I am going to condense it into one post. Which means many details and observations will have to be left out, but suffice it to say, those details made their mark on my mind and soul and as always worked to shape my understanding of our world and my identity as it relates to it

Last year there was the Philippines on Two Wheels (I actually managed to get a post out on that that you can read here), from there I flew to Indonesia, where of course I bought another little motorcycle named Indie that I would use for the next 2.5 months to explore the country.

I flew solo for a while but after one month was craving some company. There are not many people I know at my age that I could call on to quit their job and fly halfway around the world to jump on the back of a motorcycle and head off into the unknown. Well, by “not many” I really mean there is ONE person…and so it was that “Team Bala” was reunited

We hitched rides on fishing boats to uninhabited islands where we camped on beaches, exploring coral reefs, searching for sea stars by day and shooting stars by night.

We spent several days diving around the Komodo Islands…then from 40 meters below sea level one week to 3725m (12,225ft) above on the summit of Mt. Rinjani the next week.

We reunited with old friends and

We absorbed Indonesian culture and hospitality.

Then there was a “visa hunting” mission that landed us in Hong Kong. The Great Wall of China has many faces, and the one that is known as the Chinese Immigration Department turned out out to be a tough one to scale.

But after one rejected application (based on the fact that our passports showed that we had visited Tajikistan), and after 10 days of zub-zero air conditioning and forced entry into shopping malls, with visas in hand we crossed into China, the country where our paths first crossed 4 years before. But this time we headed to Xinjiang province, also known as East Turkestan, where the muslim Uighur people live.

Imagine a country (it was a country, East Turkestan, before China annexed it in 1949) that borders….get ready for it….Mongolia, Kazakhstan, Kyrgyzstan, Afghanistan, Tajikistan, India, Tibet, and China….imagine the cultural overspill and mix of history, AND…that there is almost zero tourism. A forgotten corner of the world that no-one seems to talk about or know that it exists. We wanted to find out what’s going on there, and to reconnected with our Silk Road roots that had been planted years before when we began our journey through central Asia on our Royal Enfield motorcycle.

Thanks to an amazing couchsurfing host (thanks Steve!) we got our hands on a motorcycle for 5 days to explore the Tien-Shen Mountains

We were shocked and appalled at the oppression and stifling security presence in the region, which makes Tibet look like a playground. It’s shameful how the Chinese government is treating the Uighurs.

We suffered through oppressive desert temperatures and bundled up in the warmest clothes we had to cross snow covered mountain passes. We rode across massive grassy plains, through lush mountain terrain and climbed up huge sand dunes  – taking in an extremely diverse landscape

We visited an animal market outside of Kashgar, where animals are bought and traded in the same way they have been doing for centuries

We were whisked around town (Korla) by a father and son who were also part of the team that helped organize a motorcycle for us. Despite not being able to communicate with each other, we were treated to dinner (there was no way they would allow us to pay), shown all the sites of the city, had drinks at a bar, and were dropped back at our hotel (after they helped us arrange our train for the next day). Hospitality 🙂

We visited lively markets where you can buy anything from old shoes to live scorpions or dried frogs by the kilo.

We watched as Uighur master artisans made beautiful copper cookware and teapots or hand carved bowls.

We shared the shade of mulberry trees with old bearded Uighur men – men under the age of 60 are forbidden to grow facial hair.

From town to town we either arrived just in time to see the an amazing Uighur old town before it was destroyed by the Government, or we arrived too late and the deed had already been done – a systematic ploy to erase Uighur culture and replace it with Han Chinese.

I was surrounded by 8 armed police officers, questioned, and had my camera searched after one of them thought I was taking a picture of them (I wasn’t).

We entered centuries old mosques, considered holy and important to the local Uighurs but that young Uighurs are forbidden to enter by the Chinese government.

We ate dinner at 11pm. There is only one time zone in China, so Kashgar, despite being 5,500km (3,400 miles) from the other side of the country, is on the same time zone.

From Xinjiang we made our way to Beijing where we began the journey home. True to our favorite style of travel we decided that flying would be too easy, the best way to arrive is overland, to see that borders mean nothing, that cultures, tradition and history shape who we are, not the passport we hold. So after about 4 weeks in China, we got on a train and headed to the nearest border. 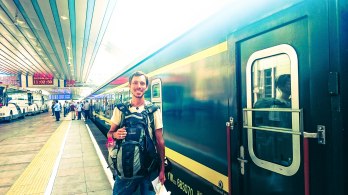 We would travel the entire length of the Trans-Siberian railway and beyond…all the way to Barcelona by train from Beijing. Roughly 250 hours gliding along tracks crossing deserts, steppes, mountains, taiga and border after border. But there were stops along the way.

The most memorable was a one month stopover in Mongolia, where of course we bought a motorcycle. Most overland travelers arrive in Mongolia from Europe riding one-up (no passenger) on their 1200cc state of the art BMW adventure series motorcycles, or their 1300cc badass KTMs to explore the dirt tracks that crisscross the steppe. We on the other hand threw down 450€ for a used 150cc Chinese made bike. His name was Khan and together we conquered the Mongolian steppe….our way. 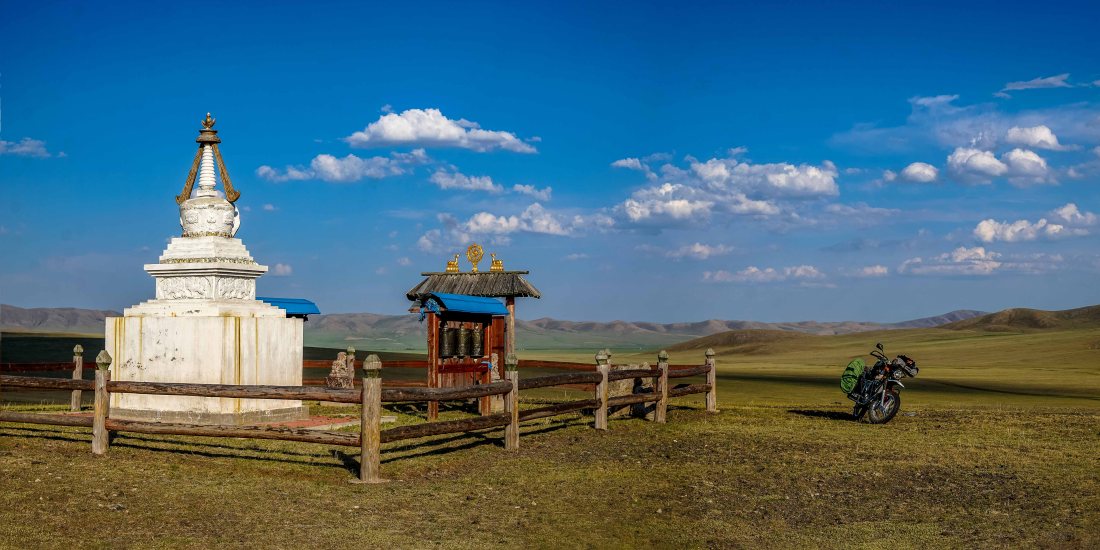 We covered 5,000 kilometers together, much of it offroad, riding two-up loaded with camping gear on our little machine. The most sparsely populated country in the world, it is easy to feel like a speck of dust blowing across an endless grassland with a sky above that looms so expansive it seems like it could swallow you up.

In our previous travels, a big part of the challenge was always to find a safe and comfortable place to camp. In Mongolia that means stopping wherever you are whenever you feel like it and putting up your tent. 95% of the time that means you would be kilometers away from another living soul, aside from perhaps some curious goats or yaks. 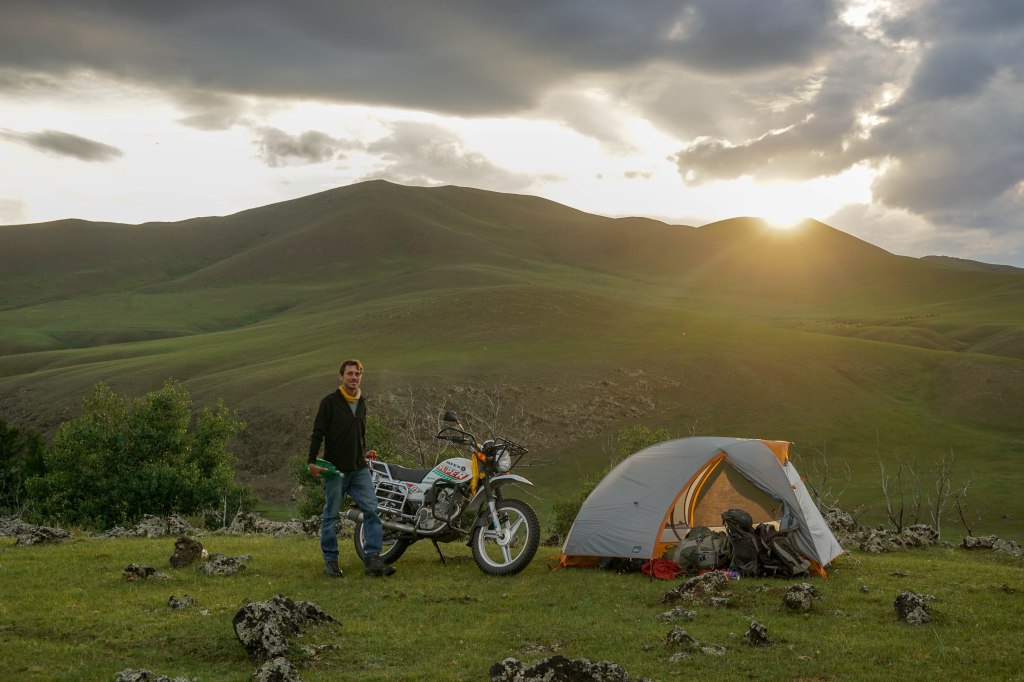 Mongolia, the Nadan Festival, where nomads from every corner of the steppe flock to the nearest town or outpost to show their skills in archery, horse riding, wrestling, and knuckle-bone throwing. Yes, knuckle bone throwing, but it’s really more of a flick than a throw 😉

We sold Khan, boarded the train again and headed to Siberia. Some days spent walking the shores of the great Baikal lake (which holds ⅕ of all the world’s fresh water…yes it’s true), camping along the way and keeping our eyes out for fresh water seals.

From there we made several stops, a day here a couple days there, in places like Tomsk, and Kazan where we noticed hints of culture and traditions that we had observed years ago while riding across “The Stans”

which had obviously spilled across borders, or rather borders had been draw around them.  And of course there were trains trains trains. We did several jaunts that took us 30 or even 35 hours consistently on one train before our next destination.

We finally arrived in Moscow, the end of the Trans-Siberian route, but not for us. As we had decided that it would be too strange to board a plane or a bus after traveling so far by train, we continued on clickety clack clickety clack clickety clack….one station after another, with stops in Warsaw, and Zurich before reaching Barcelona in the middle of August, flooded with tourists and sunshine.

And that was that. I had departed on that journey in January, expecting to be home in 4 months. Seven months later and a few more stamps in my passport I was back home.

Soon the planning would begin for the next adventure. Which has now arrived at my doorstep.

4 thoughts on “Indonesia, China, Mongolia, and the Trans-Siberian”