The Colombian Flag. The yellow represents gold (Colombia was very rich in gold), the blue represents the two oceans that it borders, and the red is the blood spilled gaining its independence.

After a hefty dose of culture at the indigenous market in Silvia I felt like a some nature to balance things out, even better if I could get some culture and nature in at the same time.  Where to do that?  Tierradentro, an archeological site near the tiny town of San Andres.  This is definitely an “off the beaten path” adventure (I say that now but I’m sure that in 5 years some backpacker is going to be reading this blog off their WIFI-connected netbook while sitting in a plush hostel in San Andres).  For those who make there in the near future though, you wont find any hostels and hardly any tourists for that matter, but you wont be disappointed I promise.

I had made friends with a bunch of people in my hostel in Popyan and a couple of girls, Lauren from USA and Karinna from Chile were also planning to head to Tierradentro.  We ended up in the same bus and before we knew it we had become travel buddies.  We got a room with three beds in a tiny guesthouse for dirt cheap and as the sun went down we set off to explore San Andres, which took all of 10 minutes considering that the town is TINY! The outstanding feature of the town (aside from the amazing mountains and the archeological ruins that surround it) is a cool little thatched roof mission church that sits across from the local elementary school.

The next morning I wanted to get an early start on exploring the ruins and mountains around the town so I took off walking by myself in the rain hoping that it wouldn’t last too long.  The ruins of Tierradentro were also deemed a UNESCO World Heritage Site in 1995.  And like San Augustin, Tierradentro is also home to a plethora of pre-hispanic

ruins.  The ruins in Tierradentro are mostly from the 6th to the 10th century and consist of a series of underground tombs where archeologists excavated human remains, gold, ceramics and other gifts that were entombed along with the dead.  There are over 70 of these tombs that you can visit today in the area around  San Andres and most are on mountaintops, slopes, and ridges.  The Indians who built them dug them straight into the ground with perfect steep spiraling staircases carved into stone that lead into the chambers.  Some of the chambers are impressively large (almost 40 feet [12m] across) and have human-like figures carved into the stone columns and  intricate paintings all over the walls and ceilings.

As with the stone monuments and ruins of San Augustin, as impressive as they are the tombs of Tierradentro also get a little redundant after you have seen a half dozen of them.  But luckily half of the adventure of Tierradentro is in in the journey, not the destination.  The tombs lie along a trail system that takes you through the mountains surrounding the town of San Andres, past little fincas and super friendly locals (I have to mention that one of my favorite things about Colombia is the people.  They are so friendly and engaging that it makes you excited to be there). 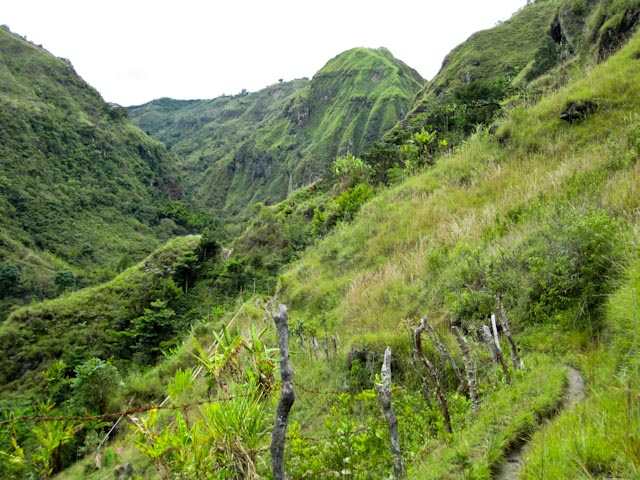 The trail to Alto de Aguacates

Most people do the whole circuit in two days but by 11am the sun was out and it was shaping up to be a beautiful day.  Rather than risk the next day being dreary and seeing half of the circuit in the rain, I decided to pick up the pace to try and do it all in a day.  I think that besides me and my two travel companions (who were a couple hours behind me) there were only 3 or 4 other tourists in San Andres so I never saw another soul (other than the occasional local) on the trails.

The highlight of the day was reaching the top of the largest mountain ridge in the area.  This is where the Alto del Aguacate ruins are found.  The other ruins were guarded by people who worked for the arqueoligical park but the hike to the Alto de Aguacate ruins is too far and strunuis for them to send a guard up everyday.  So I found myself alone, with a spectacular 360 degree view of the surrounding mountains and valleys, free to wander through dozens of 1,500 year old underground tombs.  I will always remember it as one of the highlights of my time in Colombia. 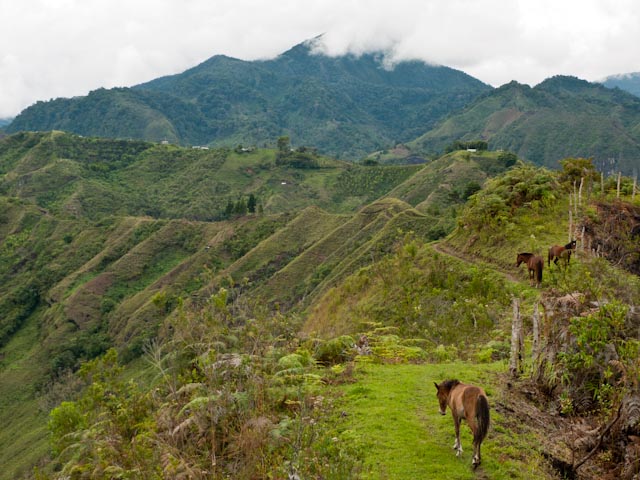 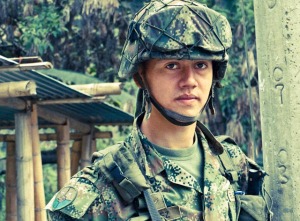 The next morning we hitched a ride with a local farmer to the crossroads (two dirt roads) where the bus would pass to take us back to Popyan.  There were a few soldiers who were holding their post there at the crossroads, none of them coule have been more than 20 years old (Military service is obligitory in Colombia).  The bus didnt come for 20 minutes so we spent the time chatting with the soldiers who were super nice and answered all of our civilian questions…

Do you actually encounter FARC (Guerillas) around here?-  “Yes”

What happens if they see you?  Do they try and run?  “Never.  They dont run, they shoot”

Is those dogs trained to detect drugs? “No, they are bomb sniffing dogs.  These hills are full of homemade land mines that the guerillas make.” (Colombia has the seconds highest number of land mines victims in the world)

It was really cool to hang out with the guys and we were all a little bummed when the bus finally arrive.  We said goodbye, and jumped aboard for a long bumpy car ride.

From Tierradentro we made a stop in Popyan to change busses and then headed to Cali.  Cali was once considered one of the most dangerous cities in the world.  When crime started to fall all across Colombia in the mid 2000’s Cali also became less violent.  However, while crime in the rest of Colombia is still decreasing rapidly, in the last couple years Cali has been through a resurge of crime due to a ‘mafia war’ between two ‘neo-paramilitary’ groups.  So tourists have to keep to a few small safe areas which isn’t a problem because there really isn’t much to see in Cali anyways that would tempt you to go exploring.  Its not a very attractive city.  Its main attraction is salsa.  Everyone is Cali is obsessed with Salsa dancing.  And half the people in my hostel were taking Salsa lessons.  Yea yea I should have tried to take some lessons too but I didnt.  I did go out one night to some salsa bars though and watched some locals who were pretty damn impressive.

So thats it for now, sorry I kindof rushed through this post, but stay tuned, I´ll make up for it in the next one (I´ve got something good in store).  Have fun wherever you are.

Where, What, When, How Much, How Long, and Personal Recommendations