Again, for those who are subscribers and who opened this from their email account, click above where is says in blue letters “Coco in the Northeast, Salvador to Parque Nacional Ubajara” to read the blog from the actual site.

If you want to listen to some REALLY Brazilian music while you read click below…It’s is “Mas, Que Nada” by Jorge Ben:

So I left Salvador with a new travel partner who would travel with me for more than 3 weeks, a girl from Poland named Anna who has spent the last 4 years in Buenos Aires but was about to move back to Europe and wanted to see a bit of Brazil before she left.  She spoke pretty good portuguese as she was studying it in Buenos Aires so of course this came in handy.  I really can’t say anything bad about Anna but there just wasnt much of a connection between us.  Sharing enthusiasm over the small things, being silly, laughing, sharing the same curiosities, waxing philosophical….I came to appreciate with new vigor and understanding all those who have traveled with me in the past who shared these things with me (you know who you are).  But we got along well enough really and so off we went.

Im not going to write much in this post, will leave most of it to the photos and videos and the descriptions under the photos on the flickr site.  So here are some photos and stories from the trip fro Salvador to Parque Nacional Ubajara  From Salvador we hit a whole bunch of small beach towns all with their own little flavor and character.  One night we slept in the bus at a beach where sea turtles come to lay their eggs.  There was a conservation project nearby that releases newly hatched babies every other day on the beach.  not knowing this ahead of time we just happend to arrived on the beach just as the last sea turtle was marching furiously towards the beckoning waves.  If we had arrived 10 minutes earlier we would have seen the full brigade but at least we saw the one!  The next day we visited the conservation center and got to see more babies up close: 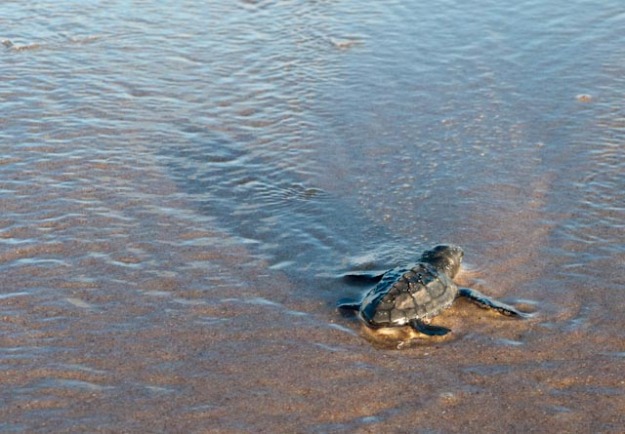 He was only about the size of your thumb.

A little side story here that will come into play in the next post…  As I mentioned before, VW  busses in Brazil are almost exclusively used as work vehicles and transport vehicles.  And in some regions they are used as transport vehicles inbetween small cities.  So its quite often that as we would be heading down the highway people standing on the side of the road would see us approaching and would think we were a transport vehicle so they would put their hand out signaling for the buss to stop.  Well, we always stopped.  They would approach the window to ask how much we were charging and when they would see a couple gringos they would take a step back, but I always gave a big reassuring smile and asked them where they were going and would offer them a ride for free and this always got their attention.  These were usually people who lived very simple modest lives in small towns or farms, people who we might normally not have come in contact and who were certianly surprised to find themselves in a bus full of gringos.  But we always tried ot make pleasant conversation in crappy portuguese and their expression and demeaner was always one of wonder (What the hell are these gringos doing here in this buss!) and of a restrained excitement of the turn their day took. In the end we always got them smiling and with a little luck laughing at our absurdism.  Surely they would return to their families that evening with the tale “You’ll never belive what happened to me today!”

Some more photos as we continued north:

Also in Praia do Forte

We were cruising down the highway when all of a sudden the gas pedal went straight to the floor... couldn't give the car gas (so couldn't go further). Luckily we were passing through a town and the car rolled to a stop in from of a guys house who called himself a mechanic. Waddled over to the car stinking of booze but for $12 he had the car running again in about 30 minutes.

We spent a few days with a really cool couchsurfer named Fellipe in a small city called Aracaju.  Aracaju means “Cashew”.  Cachews are a big thing in Brazil.  The trees are everywhere and they sell cashews on the side of roads and streets in every city.  They also make a juice out of the Cashew fruit.  Fellipe is a true adventurer having spent months cycling around Brazil trying to raise awareness for biking as an alternative to cars. Unfortunately I forgot to take a picture with Fellipe.

We had to do quite a few river crossings on ferryboats which were always pretty fun. On this one of the other three cars on this boat had California license plates. So of course I said hello to the drivers who turned out to be an Italian couple in their seventies (!!!) who bought the car in California and spent the last 8 months driving it from California to the tip of South America! When I met them they were already on their way back up north where they planned to sell the car and fly back to Italy from Suriname.

Approaching some small town from the ferryboat

We spent a night with two couchsurfers named Wonder and Luciano in Maceió who were also heading north so they joined us for a day and we gave them a ride to a town about 250 kilometers north.

Eating sandwiches and drinking beer while we wait for the ferry

We spent a night in a small city called Recife that has a pretty cool colonial historic center.  Here we were hosted by Albert who was a really nice guy but we hardly got to spend anytime together.  He’s a lawyer and an actor (Sounds like he should be living in LA!).  We lucked out and the one night we were there in Recife they had a big pre-carnival celebration (Literally you can feel the approach of carnival throughout the whole country about a month before it actually comes…every big city has huge parties every weekend for a month leading up to carnival).   Here is a short video of some people playing music in the street:

The Historic Center in Recife, just a few blocks from where the band was playing in the street.

Albert, our Couchsurfing host in Recife

From Recife we went to a small very colonial town just north called Olinda.  Narrow cobblestone streets with small shops on either side painted in different bright colors. 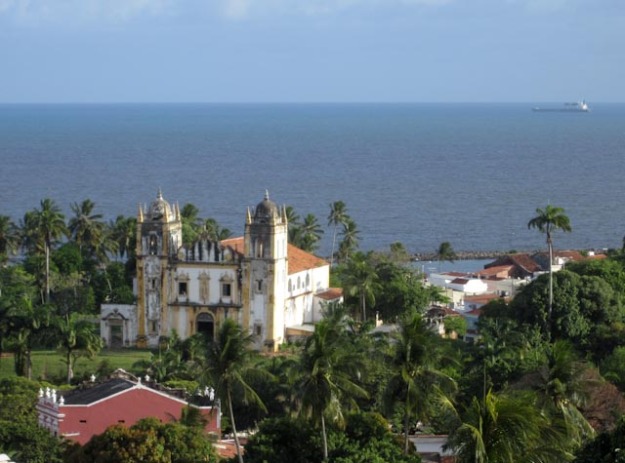 The next memorable stop after Olinda was in Macau which is one of the largest sea salt producers in Latin America.

Near the Salt Flats

So we had to do anther ferryboat crossing near Macau and one of the other 4 car on the boat was a news agency.  I tried to chat with him in Portuguese, asking what they were reporting on.  Turns out they were doing a piece on the culture and beaches of that region.  He asked what I was doing there and I explained how I had bought this VW bus and was driving up the coast, he thought it was a great story and asked if we wanted to be interviewed for the news piece…Sure!  I cut out a bunch of it and added some subtitles (thanks Moose)…this actually aired on the local news, pretty funny…

We found an amazing spot to sleep that night next to a lighthouse on a bluff overlooking the ocean, we woke up to an amazing view of the Atlantic…

This was taken using only moonlight...

We stoped at some other nice beaches on the way to Fortaleza, Pipa, and Canoa Quebrada being the best.  In Pipa Anna stepped on a venomous Stonefish which created a bit of a ruckus and almost had us paying a visit to the hospital but she toughed it out until the pain got better.  So we arrived in Fortaleza and stayed with a really cool couchsurfer named Gerson.  It was interesting to listen to his explanation of how things function “territorially” in a city like Fortaleza that is pretty dangerous.  How there are certain streets that are “safe passage” to walk on even late at night, streets the criminals dont hit because they know that if YOU know that street is a safe passege that you must be from that neighborhood and they dont like to mess with people from their own barrio.

In Fortaleza we also gained another passenger, an Italian girl named Francesca who owns a wine bar in Tuscany.  She joined us until Sao Louis (about 4 days) where she had to fly back to Italy.  A good sport with positive energy I was glad to have her aboard.  From Fortaleza we felt we had gotten a bit burnt out on beaches so we decided to get off the beaten path and headed towards a random national park that is not on most tourist routes that was supposed to be about 3 hours inland.  3 hours turned into almost 8 due to HORRIBLE roads with gigantic potholes and torrential rains.

Parque Nacional Ubajara. We hiked an hour through the jungle to get to this waterfall.

4 thoughts on “Coco in the Northeast, Salvador to Parque Nacional Ubajara”