This morning I woke up in New Delhi. I have been living here for over a month now. India is everywhere around me, its in the smell of sweaty people packed into a congested metro train, in the sound of a deranged and never-ending symphony of car horns, in the street food, the smiles of the kids, the traffic, and the colors of womans sari’s. I work as a volunteer for an NGO that runs some free schools in one of the larger slums of Delhi. But as usual, the weeks since my last report, since my motorcycle trip through Southern Europe, have been full of stories, new places, old and new friends. What have I been up to in the last seven weeks? Take a look…..

I rode a bike across London Bridge.

I watched a cow languidly eating curried vegetables from a plate while standing in the middle of congested traffic.I was the top of a human pyramid on an abandoned train track/city park in lower Manahattan.

I reunited with old friends and family in New York. We laughed like idiots, we drank too much, stayed up too late, slept too late, and ate like pigs. 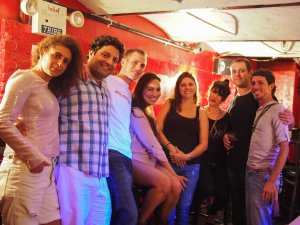 I admired the fact that bellbottom pants seem to have survived the 70’s in India.

In New York I saw the first of the four “Sunflowers” paintings that Van Gogh painted in Paris. 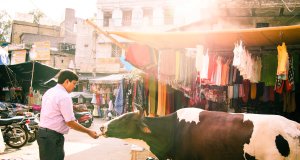 I marveled at the absolutely spotless train tracks and platforms in the New Delhi metro stations.

In London I saw the 3rd of the four “Sunflowers” paintings by Van Gough.

I spent many days in the slums of New Delhi admiring how happy and friendly people seem to be, despite the human waste that surrounds their homes, the 12 people they share their single floor with, the millions of flies that never leave you alone, and the fact that the government seems to ignore them.

I ate a dessert called “Arctic Fox Poo” with one of my dear and close friend.

I watched a four year old barefoot girl with knotted hair and hands and face black with dirt do cartwheels and backflips between cars at a red light in Delhi. She then came to the rickshaw I was in, stared right into my eyes, and made the motion of hand to mouth, asking for food or money. I know it’s the worst thing I could do…to give her money, but that girl, who looks into your clear western eyes, at your backpack that she knows contains a camera worth more than her home or more than what she was purchased for…she doesn’t know all the reasons why you don’t reach into your pocket. How can she accept that I can’t pull out and give her a 10 Rupee note, worth about 8 cents? What is going through her mind as she looks at me and I smile and shake my head silently mouthing the hindi words for “Im sorry”. I have never made peace with this situation. (If you don’t know the reasons why you never give money to street children click here)

I deftly snuck into The Museum of Natural History in London. I was quite proud of my

stealthy abilities and the money that I had saved.

I became an Indian….almost. I am an official Indian resident complete with documents.

I watched a sunset from an airplane that lasted 6 hours.

Thirty minutes after sneaking into The Museum of Natural History, I discovered that admission to all museums in London, including that one, is free.

At a busy pedestrian area in Union Square, I wrote out a short inspirational message and left it in a wooden box for someone to find. Someone did find it and then they found me. They wrote me a long message that gave me goosebumbs to read, this is one sentence from it: “You do not know me, but you’ve brought magic into my life…I hope you find yourself blessed with a journey and that you are the hero of that journey.”

I met an old friend in Delhi who I haven’t seen in 3 years. We met 6 years ago in  Hollywood, coincidentally he was in Delhi visiting family and saw from Facebook that I was there too.

I saw someone slip, quite theatrically, on a banana peel.

I have spent countless hours in Delhi searching for my Rocinante…the trusty motorcycle I will buy that will take me through India and 20 other countries on my drive back to Spain. Still no bike…

In other news…I received word from my friend in Marseilles…with is help, my old motorcycle Billie Jean was sold at a fair price…the end of an era and the beginning of a new one….Thanks Szymon! 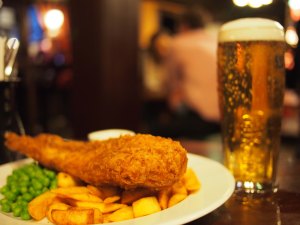 I ate Pizza in New York, Fish and Chips in London, and Dahl in India.

I smelled things walking through the streets of Delhi more powerful and intense than I have ever smelled before. Sometimes pleasant, sometimes not.

I went fishing in Long Island Sound on a boat  with one of my oldest friends. The only thing we caught was a buzz from the beer we were drinking. 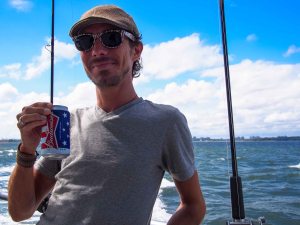 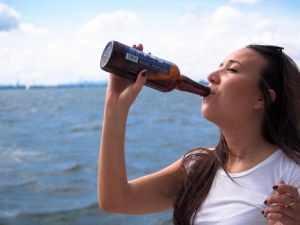 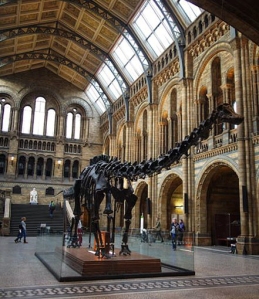 I researched and created an “Old Delhi Foodie Walk”. A walking tour that shows tourists the best of Delhi food culture in the “Old Delhi” neighborhood. The proceeds from the people who take the tour benefit the slum schools run by the NGO I work with. I have given the tour to 4 groups, so far no complaints.

I had a picnic in Central Park for the first time in my life when there were leaves on the trees and I was in short sleeves…despite the fact that I lived in New York for 8 months. 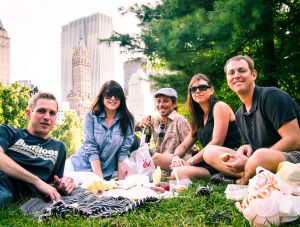 My second day in Delhi I came down with a serious case of Delhi Belly. I didn’t eat anything for 4 days and didn’t fully recover for almost 10. Those first days in Delhi, laying sick in a cockroach infested hotel room that was costing me $4.50 a night, I wondered with fear, knowing I was to be in India another 6 months, if I would ever be able to look at Indian food and curry again.

I rode a bike around South Manhatten a Polish artist and filmmaker who now resides in Barcelona.

After having made a full recovery, sans antibiotics, from my Delhi Belly, I began drinking ¼ of a cup of tap water every day to build up immunity. Now I eat anything, even some things my local Indian friends think I’m crazy to eat…and I am officially in love with Indian food.

I stayed with a guy who grew up in a conservative Muslim family in Northern India, moved to the US at 18, discovered alcohol and parties, became an atheist and a successful banker earning a very good living. At 36 he felt the call to return to his Indian roots. He quit his job moved back to India and started a co-op to help farmers in rural Kashmir.

I got my international motorcycle license. 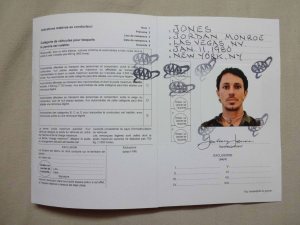 I learned about “The double lives of India”. How an ultra-conservative culture brimming with cultural and religious rules and expectations leads people to lie to family and loved ones.

I drank beers with some Muslim guys. They said their wives have no idea they drink. Telling them is simply not an option…their marriage and entire family would be lost forever. They said don’t feel that the rules of a religion that they are only passive believers in, should dictate their lives….they also said they lie to their wives because they love them, and they don’t want to lose them, and I believe them.

I stayed with a guy who, pressured by his Hindu family, pursued a coveted degree in engineering and afterward scored a dream job as an engineer in Delhi. After a death in his family he re-evaluated his life, quite his job, and decided to go back to school to be what HE always wanted to be…a Biologist. he is in his second year. He’s happy now. But his family still thinks he goes to his engineering job every day.

Tomorrow I go look at another motorcycle…could be the one…

I feel I am standing on the edge of a great new adventure, about to dive in. 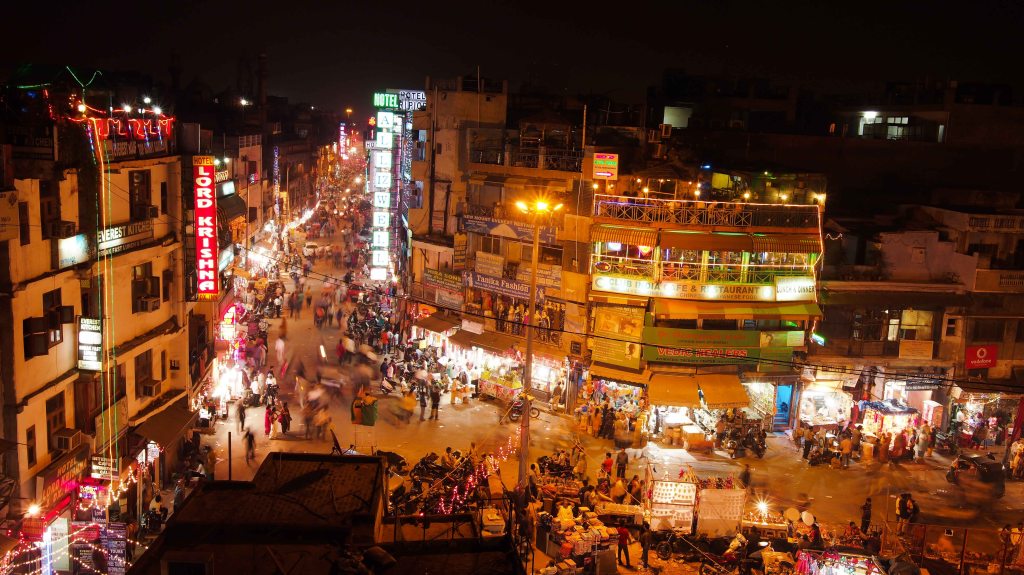 THANKS FOR READING! FOR THOSE WHO PREFER FACEBOOK PLEASE FIND ME THERE AND ADD ME AS A FRIEND.  ON FACEBOOK I POST MORE PHOTOS (AND IN LARGER FORMAT) AND DESCRIPTIONS AND LITTLE STORIES TO GO ALONG WITH THE PHOTOS.  CLICK HERE TO ADD ME ON FACEBOOK