So arriving in Belem was like coming home, thanks Roselis, the jewel of the Amazon, and her friends Leandro and Simoni. Roselis was to be my couchsurfing host for my first few days in Belem and as soon as she opened the door of her apartment it was like walking into the home of an old friend. Her passion for life, her intelligence, and her mischievous which all shone in a twinkle in her eyes. She has a PHD in Biology and works for The Nature Conservancy forming relationships with Amazonian tribes to assist them in using their political influence to help conserve land (Yea…pretty cool).

It was so nice to meet someone who I shared a connection with, someone who propelled conversations into new realms and who was funny as hell!  And as if it wasnt enough of a gift to meet Roselis, as part of the package deal I was introduced and welcomed into her group of intimate friends that functions like a family. The first night I was there we cooked a big dinner and were joined by Simoni, her best friend who lives across the street and owns a pizzaria down  on the same block. We spent the night drinking wine and beer, sampling rum and salt from around the world, talking and laughing. And thus began my time in Belem, which was to last a week and a half but ended up lasting 3 weeks!

Belem was founded in 1616 and was the first European colony on the Amazon.  I actually thought the city was rather charming.  Huge mango trees line the side of the busy sidewalks dropping gifts on the heads of unsuspecting pedestrians (It’s known as the Cidade das Mangueiras (city of mango trees).

The culture of the Amazon is everywhere, in the food, the markets, the music and of course the weather which was hot and rainy.  Speaking of markets, Belem is  home to the “Ver-0-Peso” market founded in 1688 which claims to be the oldest continually operating market in The Americas.  The market is a kolidoscope of colors and smells and sounds.  With hundreds of stalls selling everything from Amazonian fish the size of a full grown man to crazy fruits that look like they belong in imagination of Dr. Seuss.  The market also has a huge section of traditional herbal medicines, potions, and concoctions meant to cure or cause just about any ailment or emotion you can think of.  Want to put a hex on your landlord?  Just sprinkle some of this green stuff on his doormat.   Gastritus?  Chew on this stick.  Want that girl to fall in love with you?  Just eat some of this pickled dolphin vagina (seriously).  All this is taken VERY seriously.  To the locals this is no novelty and they are quick to share stories with you (in all seriousness) about…”That one time when my best friends ate some macoca root to help him sleep and he didn’t wake up for 6 days!”

I took bunch of photos of the market so if you want to take a photographic tour of Belem click here:  Ver-O-Peso Photo Tour (I added to descriptions to some of the photos)

So why the hell was I in Belem for three weeks, a city that most travelers skip all together or at the most spent 2 or three days? One word, a word so great and powerful that it is really 3 words…DETRAN…also known at the Department of Transportation.  I will spare everyone the details…details which have been smothered by liters of tropical heat induced sweat, levels of frustrations nearing psychosis, and stacks and stacks of bureaucratic papers. The jest of it is that I had to sell Coco.

I had a buyer…a couple of coushurfers who wanted to drive her back down south and then into Argentina, Bolivia, and Peru. But before I could sell the car to them I had to have it legally put into my name (I had been driving it under the grace period given when you buy a new car). This experience turned out to be one of if, not THE most challenging and frustrating things I have ever been faced with in over 30 months of my life I have spent traveling.  My patience was undergoing tests that resembled shock therapy.

Just one quick story that doesnt even scrape the surface of the whole ordeal but must be told….So on my fourth (out of 7 trips) to DETRAN, I was still naive enough to think that “today would be the day”. I drove the 40 minutes in sweltering heat to DETRAN where I got my “inspection” of the car. I failed. Why? Because my SPARE tire was “too worn”. Yep. Defeated for the day (DETRAN closes early) I made a plan for the next day. Next day I make the treck again but stop at a tire place near DETRAN and strike a deal with the guy. I’ll pay for a new tire, he “lends” it to me to pass my inspection, I return the tire two hours later and he gives me 90% of my money back. Deal. I walk out of the place with my new tire and in the 10 minutes that passed while this deal was being struck, a gigantic crack appeared on my windshield. Just like that. Crack. No way I’ll pass the inspection with that so I set off looking for a place that replaces windshields. I’m sweating like a pig driving around for 2 hours till I find a place. $200 and 3 hours later and I have a new windshield. Of course now DETRAN is closed. Next morning I was up ready for battle, head to the car and…Its been broken into! Everything was stolen, GPS, my lucky hat, the spare change from the ashtray, and…the spare tire I was supposed to return. Ok, stay calm, that’s life. Gotta go to DETRAN, gotta get this done. Jump in the car and head out. I go 5 minutes before I realize I need gas and pull into a station. I reach for the key to the gastank (always kept in the ashtray) and of course it disappeared with the spare change. So now im out of gas and have no way to put gas in the car.  Did I ever make it to DETRAN that day?  Yes I did (with the help of locksmith). Did I sort out all the paperwork? Lets just say that the paperwork should be all sorted out sometime this week. Yes, literally this week. I arrived in Belem on March 2nd, am currently in Colombia and have been since March 22nd and it is STILL not complete. But alas, those are the challenges of traveling, always testing one’s patience, persistence, and ability to adapt.

So all this time I had on my hands in Belem was not waste away but rather was spent in good company of my new friends.  As Roselis had to leave for a while to go to a conference of tribal leaders in Manaus I also spent some time with a couple other couchsurfers.  I was hosted by a couchsurfer named Lysmar who was super cool.  He lives with his family, mom, 2 brothers and sister in a very (Belemese) neighborhood.  I also spent some days with Leandro who works with Roselis at The Nature Conservancy and who introduced her to couchsurfing.  Leandro was just as welcoming and open and cool as Roselis and formed an integral part of the little Belemese family that I fell into.  The other family member who I have already mentioned was Simoni who I saw just about every day.  Like a couple of accountants dividing up their restaurant bill we would geek out with restaurant talk…food costs, fickle customers, and the difficulties of training good servers.  Having heard of the legendary martinis from my familie’s restaurant that I used to run in Hollywood she went out and bought the ingredients and we had a Martini Night at her restaurant. 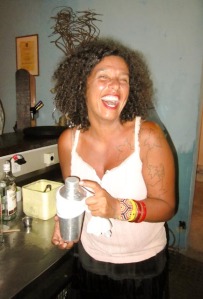 Simoni also invited me to go kayaking in the river one morning (Woohoo!)  So I got to spent the morning kayaking through the amazon basin past mangroves and jungle.  We stopped in a floating restaurant and had an amazing lunch of grilled fish plucked straight from the river.

Hmmm, what else did I do while in Belem…there was a great open air market and free concert in the main square (which was one of the nicest plazas I saw in Brasil).

A lot of my time in Belem was also spent trying to figure out an adventurous way to reach Colombia.  Someone told me there was a large industrial port in a nearby city so I  actually took a one hour boat ride and a one hour bus ride to reach the port with hopes of getting some commercial ship that would sail along the coast of the Guyanas and Venezuela to Colombia to let me sneak on board and work in exchange for my passage.  Didnt happen 😦  But at least I gave it a good try.  In the end I found a couchsurfer who used his airmiles to buy me a ticket for half the regular price.

And so, thus were the my final days in Brasil…at least until I return in May to conquer the Brasilian Amazon.  I caught a plane to Bogota on May 22nd.  Thanks to my Belemese family…If not for them my three weeks in Belem would have felt like a waste of time, instead it was a time a I will always remember.  So long for now Brasil!

PS:  In my last post (Farewell to Coco) I forgot to include the map that showed my route.  If you want to check it out click below on the blue link (you can click on the little blue pin markers also for details).  In the end I did 6500 kilometers (over 4,000 miles).  That is just the straight shot route that does not include all the other time and miles I spent driving around in cities, taking wrong turns and othe random detours.

3 thoughts on “Goodbye Brazil and Cheers to Belem, DETRAN, and New Family.”